A downloadable game for Windows

Description:
Scythe Story features a world in which mushrooms with dark magic have descended the once peaceful kingdom into chaos. In this single-player 2D roguelike game, you play as Circe as she fights off hordes of monsters, collects coins to upgrade her abilities, and rids the world of the corruptive force.

Circe is blessed with several magical abilities for her use. Her first gift is her Scythe itself allowing it to damage enemies in a swift strike. Additionally, it can be used to summon a fireball to deal damage to enemies. By chanting, Circe and her Scythe can release circle of runes that purifies enemies it comes into contact with. Additionally, she can eat a mushroom to heal back some damage taken. Her scythe can launch a sphere stunning enemies it comes into contact with and also grant her super speed.

Circe faces both mushrooms and bears infected and controlled by these mushrooms. Mushrooms in their own form are easy enough to stop with a few swift Scythe Strikes. However, whenever they take over Bears they can affect their brains leading to erratic behavior. Bears are also tougher and may require a stun or two to take some damage. When in a pinch, a clear Cleansing Chant will take out anyone and may just save you.

At the start of game development, we planned to have each artist create sprites in their respective art styles. However, during the first check-in it was apparent that the player and the enemy sprites looked too different from each other. Fortunately, this was quickly resolved when, as a team, we decided between the painterly style and the pixel style, which one was more favorable. The pixel art style won, due to its simplicity being easier to replicate and less time-consuming to make, and because it looked super cute. To achieve this art style, we also decided to use less shading, and add an outline to the characters. The result was unified and pleasant-looking art.

With Scythe Story having its core loop of defeating a mob of enemies, we needed to have a decent AI system. We couldn’t have the enemy wander back and forth within the room since the core loop wouldn’t be enforced. If the enemy tracked the player, the player would need to react to the enemies chasing them and use the other game mechanics accordingly. For example, the player would need to use and upgrade their abilities carefully to survive the waves of enemies.

For the game that we were creating, we needed a diverse team to be able to achieve it. With our team consisting of three programmers, two artists, and a team leader, we were able to effectively separate the project into multiple parts for each member to focus on. Each programmer would need to learn a specific part to code their part of the game instead of trying to learn everything at once. As for the artists, they were able to make all of the assets for the game without being overworked.

Throughout the development of Scythe Story, a major problem we encountered was when we attempted to use GitHub collectively. On one hand, we were able to complete all our milestones on time, on the other hand there was always an issue whenever we tried to merge the team's code together in GitHub.

This problem resulted in our game progress being delayed since GitHub couldn’t update to the latest versions of the members’ code. The problems with this site got to the point that GitHub ruined all the code right before the game was about to be completed. We tried searching for various solutions, however, nothing seemed to fix the problem.

When we were doing the initial design of the game, we had a lot of ideas that we were planning to implement. From companions that followed the player to extra to multiple levels, the initial design was going to be much bigger. However, we were overshooting the concept of the game and we wouldn’t be able to add all the elements within the short time limit of one semester.

We had to remove a lot of the concepts for us to finish the game within the time limit. With the removal of all the extra work, we were able to focus more on the mechanics that we needed to make the game instead of the things that we wanted for the game.

What changes were made and why?

One of the major changes that we do to the game would be making the game take place in one room. Previously, the game was going to have multiple levels that the player progressed through multiple stages. The player would also have companions that could help the player navigate through the level.

Due to the time constraints, we wouldn’t have been able to make such a complex game within one semester. As a result, we had to cut down a lot of those features. In the end, we reevaluated the design of the game to make it so that the player would be in one room.

2. Cutting some of the Enemies

There were some enemies that were cut from the final design of the game. Enemies, such as the mini bosses, final boss, and a projectile based enemy were removed. With the extra enemies, they would require more time from both the art and coding team that we didn’t have.

With removing those enemies, the art and coding team were able to have more time to focus on the games core mechanic of defeating hordes enemies. With fewer enemies, the coders didn’t have to make unique AI for each of the different types of enemies. As for the artists, they won’t have to design frames for all the enemy states.

What did you learn?

1. The Amount of Effort Required

As previously mentioned, we were planning a lot of ideas for Scythe Story; however, we couldn’t create it all due to the short time limit. With each new idea added, there would be a lot of code and artwork that is needed to make the concept happen. It was likely that we underestimated the time taken to create everything and overestimated the time we had.

To complete such a great feat as creating a game, it was crucial for us to learn how to collaborate with each other. We needed to make sure that each member completed their part on time and stayed on track, which we accomplished through having a team leader, many schedules and to-do lists. If one of us was stuck on a problem, we reached out through discord, asking if they needed any help. Responsibility, time-management, and communication were all necessary skills that needed to be exercised so that we could end up with a fully functioning game. 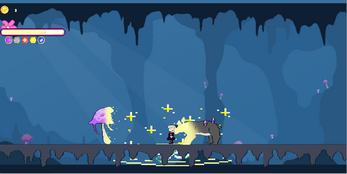